Who Killed Lucy? This was the first time my football-fanatic flat mates understood what I have to go through in life. They don’t watch EastEnders, they don’t know who Lucy is, they don’t care, yet everyone is talking about it.

I do not like the game, I try not to watch a game, I don’t know who that player is and I don’t care.

Despite this it has disturbed a lot of my life and will continue to do so. I wouldn’t be surprised if it’s on in the background whilst I am on my death-bed.  During the weekend it is a mission to try to get by without it disrupting me in some way but it will be saturday lunch time and the living room telly is blaring out ” I am on my waaay- eeee”

Over the years I have picked up a few main points that irritate me most about the game:

Till We Die- keeping loyal in a marriage is never going to be easy despite vowing ‘death do us part’.  However, keeping loyal to eleven ever-changing men for the rest of your life is unquestionable.

Mood swings – here is exactly what happens every time a match is on (in reference to animals. )

Spurs score a goal-screaming, running , clapping , jumping like a chimp

Yellow Card to Spurs REF! Fuck!!! HE TRIPPED OVER HIMSELF!!!” – angry like a tiger

0-0 – All I feel is : we could have gone out for lunch.  We can all agree that is a complete waste of an afternoon and after all that money and training not one person can kick the very small ball into the very big net.

Team enemies – My family has always supported spurs when I was in relationship with an arsenal supporter it was like the Montagues and Capulets. What I don’t understand is that these teams are both in London why can’t they just be happy a London team is winning? In fact why can’t they just join up and make a super team then getting all worked up over a canon and a cockerel.

Betting –  two things: ‘shirt numbers’?  and that geezer/god father fellow that announces odds in the commercials. 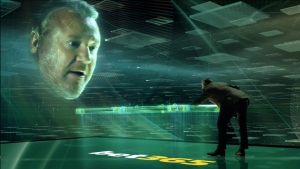 Passionate arm gestures. The constant screaming and throwing of the  arms over ones head as if they have just seen their cat being run over.

If only you were this passionate about my day….

Time scale–“It’s only 90 mins!”  well, it’s not…. is it?  You have those dimwits in suits at the start, middle and end of the game making an analysis about some blokes kicking a ball around. What’s worse they have now been given all these fancy computer markers, highlighters with special effects like it some sort of Avatar space station.

Fantasy League – You are making up a fantasy about football.

What do you win?

You are on top of the league.

You are on top of a league that doesn’t exist.

Radio – Five Live just brings back memories of when I was six coming back from centre parks  feeling car sick from Ribena whilst hearing “This Is Five Live…” followed by some awful track.

The Big Talking Head –Ah the football is not being filmed. great we can spend the afternoon together.. wait. no. what’s this? There is a giant head in our living room watching it for us… fantastic.